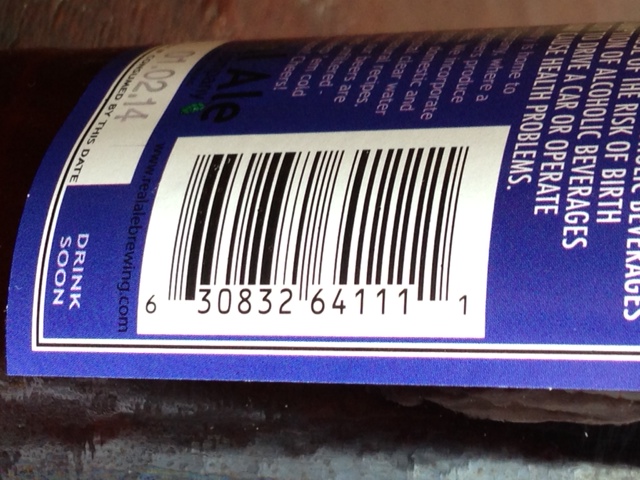 A couple of weeks ago, the graphic designer for one of our new brewery customers asked us about generating the barcodes for her packaging…the Universal Product Codes (UPC codes).

We said “sure,” we can generate in the barcodes if she gave us the numbers, and pointed out that UPC barcode generation was easy to do on her own.  But it wasn’t generating the barcode she needed help with.  She wasn’t quite sure where to get the numbers.  She had done great work in designing for industrial clients, but was new to consumer products, and she was in a rush because she needed UPC codes for the swag she was loading into the brewery’s web store, as well as for the packaging she was working on with us.

The designer asked the brewery owner about getting UPC numbers, he jokingly told her that she should just make up a number for each of the products she was setting up.

Well…anyways… she thinks he was joking.  We pointed her in the right direction, and reminded ourselves that we needed to get an article on barcodes posted to our blog.

UPC’s really aren’t a joking matter.  Screwing up a UPC code can render your brew almost unsaleable, no matter how good it is.  For example, Herb, one of our prepress gurus, called us from the plant about a month ago and said “Robert, I just scanned the code on the Tiddlywink Saison [name changed to protect the guilty] and it came up as fresh peaches.”  Good catch, Herb.  Turns out that the designer had cut and pasted in a UPC code for position only, and nobody replaced it with the right code until it was submitted for proofing and production.   If Herb hadn’t caught it, a couple thousand dollars’ worth of unusable packaging would have been produced.

The idea for UPC codes came up in the mid-1960s as a project for the National Association for Food Chains as a way to track stock and speed checkout at a time when the grocery stores was evolving from small, independently owned shops offering a several hundred or a few thousand different items into large stores run by conglomerates and selling tens of thousands of different items.   The idea was that an 11-digit code could identify any grocery product to enable speedy checkout and automatic inventory tracking.  The UPC system was launched in 1974 when a pack of Wrigley’s chewing gum was scanned in Troy, Ohio (or so claims Wikipedia).

The technical aspects of UPC symbology are beyond our scope here, but the 12-digit UPC code is one of three common code systems in use now—and certainly the most common system here in North America.  The 12 digit system (11 digits plus the check digit) is technically known as “UPC-A” and it’s the one that most breweries are dealing with.  The other two systems are “UPC-E,” which is six-digit a “zero suppressed” system suitable for very small packages, and the “EAN” or “European Article Number” system, which has an extra digit and expands the number of possible codes from one trillion to ten trillion.  Not all retailers will accept UPC-E codes or EAN codes, so before you go that route, you need to have a serious talk with your distributors and your retailers.

While leisure suits, wide lapels, and Elvis didn’t survive the 1970s, the UPC system lived and prospered.  But there’s still some mystery to many new brewers as to how they come to be.  You don’t just make up a number, of course.  In our next post, we’ll discuss how a brewery (cidery, winery, soda maker, etc) goes about getting a UPC code the right way.