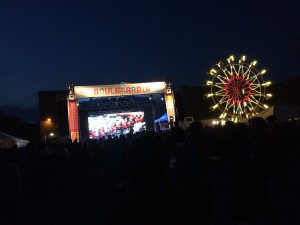 The highlight, though, was the “Taps and Tastes” session which featured a number of great breweries from around Kansas City and around the country.  A lot of the breweries were fairly close to home, including some of our favorite brewpubs and package breweries:   Cinder Block, Kansas City Bier Company , 75th Street, Martin City, and Big Rip, and from Kansas, Free State, Tallgrass, 23rd Street, Lb Brewing, and Blind Tiger.  There we also some participants from the other parts of Missouri, including (but not limited to) Mother’s, O’Fallon, 2nd Shift, Side Project and 4 hands in St. Louis, and from Nebraska, including Nebraska Brewing and Upstream.   But what was most enticing were the smaller but growing breweries that came from other parts of the country, including but not limited to Ska, Funkwerks, Crooked Stave, and Oskar Blues from Colorado, Off Color from Chicago (which has the cleverest brewery website I’ve seen lately), Jolly Pumpkin from Michigan, Russian River from California, and from New England, Allagash, Pretty Things, Ommegang, and Cambridge Brewing.  We’re pleased to see some of our customers among the breweries that participated and grateful that so many of them made the long trip.